You might enjoy the attached video of our most recent walk for peace. Thanks for watching!

77 years ago the U.S. dropped the first atomic bomb ever on this Japanese city. We gather to acknowledge its horrific immediate and lasting effects, and to support eachother in creating peace in whatever ways we can.

After meeting on the Kellogg-Hubbard Library lawn at 6:45 pm, we will walk silently down State St., pausing at 7:15, the moment the bomb was dropped, as the Christ Church bell tolls 77 times. Then we proceed to a field at Montpelier High School.

In a circle there we will share our thoughts about peace and war, and join together in singing peace songs. Finally, we will send flowers down the river with our aspirations and commitments to peace.

In case of rain, the event will move to the Unitarian Church across the street from the library.

Earth Day March and Rally for All Species Day, Montpelier

The Mobilization for Pollinator Survival, in collaboration with the VT Military Poisons /PFAS Coalition is presenting a family-friendly Earth Day event, entitled “Earth Day March and Rally for All Species”. The event begins with march participants gathering at Montpelier City Hall at 11am and marching to the Statehouse at 11:30. Costumes focusing on creatures of land, water, or sky are encouraged. Marching music will be led by Brass Balagan.The rally will feature young people speaking to their concerns regarding threats relating to species extinction – which, if not dealt with effectively, will have a devastating impact on their future. There will be a special focus on pollinators and aquatic life, ie: species that are most threatened at this time in Vermont due to agricultural pesticides and toxic pollutants in lakes, ponds, and waterways. Musical interludes during the rally will feature environment-related songs led by Aro Veno and Friends.

Aware of the interconnectedness of all beings, members of Buddhist Peace Action Vermont practice to cultivate conditions for peace and compassion in our hearts and in all our relationships. As engaged Buddhists, we advocate for social justice and environmental sustainability in our home communities and in the wider world.

We aim to recognize the interdependence of all beings; meet suffering in and around us directly and with compassion.

All are welcome to gather at Kellogg-Hubbard Library, Main Street, Montpelier, to carry paper cranes made in Hiroshima on the 76th anniversary of the bombing.  We will walk silently down State Street, pausing at 7:15 when the bomb was dropped while church bells toll, then to Montpelier High School to sing peace songs, reflect, and send flowers down the Winooski River with commitments to peace for our planet. 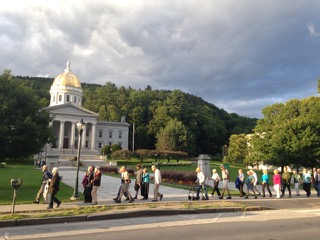 Where:            Starting at Kellogg-Hubbard Library, Montpelier

The annual Remembering Hiroshima Peace Walk and Ceremony on August 6 began at 6:45 p.m. at the Kellogg-Hubbard Library in downtown Montpelier and proceeded in silence down State Street to the high school. Participants carried peace cranes made and donated by a Hiroshima resident whose family experienced the bombing. At 7:15 p.m., the exact time of the dropping of the bomb, the bells of Christ Church chimed 76 times, once for every year since the bombing. Upon arrival at Montpelier High School, a short ceremony took place in which we shared our thoughts on peace and war and sang favorite peace songs, culminating in sending flowers with intentions for peace down the Winooski river. All welcome to participate.

Individual well-being and the health of our planet are inseparable. In the face of global warming and the sixth great extinction of species, BPAV supports restoration of planetary ecosystems, adoption of renewable energy sources, divestment from fossil fuels, and reduced consumption of earth’s resources. We take these actions as an urgent personal and collective responsibility, born of love for our planet and for all living beings.

“Engaged Buddhism is defined and unified by the intention to apply the values and teachings of Buddhism to the problems of society in a nonviolent way, motivated by concern for the welfare of others, and as an expression of one’s own practice of the Buddhist Way.” (Sallie King)

We are witnessing the rise of fascist governments around the world which are a threat to peace, social justice, and a compassionate way of life. This trend is written about by former Secretary of state Madeline Albright in her 2018 book, titled “Fascism: A Warning.”

Jason Stanley, a professor of phi­losophy at Yale University and author of the bestselling 2018 book, How Fascism Works: The Politics of Us and Them, discusses the fascist tactics used to maintain power. These include “Demonizing immigrants, delegitimizing political opponents, mobilizing paramilitary groups, undermining experts, attacking the press, and lying incessantly until there is no accepted truth are all classic tactics used by fascist leaders throughout history.”

In recent years democracies around the world have become steadily weaker. This has had a great impact on the lives of their citizens. As one example in the U.S. “Over the past 50 years, the highest-earning 20% of U.S. households have steadily brought in a larger share of the country’s total income. In 2018, households in the top fifth of earners (with incomes of $130,001 or more that year) brought in 52% of all U.S. income, more than the lower four-fifths combined, according to Census Bureau data.”

An awareness of the interconnectedness of all life is central to a Buddhist view of the world.  This implies holding ourselves and all living beings in great compassion. To quote one of the mostly widely recognized Buddhist teachers Thich Nhat Hanh, “We are here to awaken from our illusion of separateness.”

Buddhist Peace Action Vermont, an organization of socially engaged Buddhists, is very concerned that our democracies are veering in a fascist direction. If left unchecked, it will certainly bring increased suffering to many of us, especially our most vulnerable. Let us reach out to Americans of all views and faiths encouraging a fuller participation in civic life. Each of us has a part to play in protecting human rights and dignity.